I’ve always been one to take luck over smarts. In digital photography, anything can be added or subtracted to an image, even a pig. But I assure you this is the real deal. My father and I were out on a wander-about, cameras in hand; he was shooting references for his painting, and I was exploring the wonderful light as the day came to a close. I stopped at this field initially for that reason. The light was at just the right angle, and the light’s temperature was perfect for digital black and white conversion.

I loved this field; the tops of the corn were lit brightly against a shadowed background; the offset of the left row of corn; the channel between the two in shadow leading to the back. I knew it was going to make a striking black and white image. I set the entire shot up on a tripod because I wanted total control of the composition and how best to capture the light as it evolved across the scene. It was that time of day when five minutes changes everything.

Then it happened. It happened so fast I wasn’t sure I had seen what I thought I had. As if right on queue for a closeup, a pig ran perfectly through the scene, and I was in place, ready! I even had the shutter time delay turned off! I usually have it set for two seconds to compensate for any trigger movement. Luck is always a good thing. This time it changed the image from a scene to a moment in time: Wilbur trying to find Charlotte. 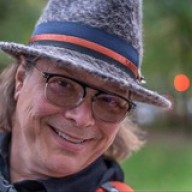